Whoever wants to invest in Spain can choose between different legal forms, with regard to the legal framework of his or her company formation. Spanish law distinguishes between corporations, partnerships and other legal forms.

Additionally, there is the possibility of working as an individual entrepreneur or freelancer (Empresario Individual/Autónomo).

Main features of the legal forms of company formation in Spain

The main features of the most common company types are analysed below:

The minimum number of shareholders for an S.A, S.L, S.L.N.E. and an individual entrepreneurship is one shareholder. It is important to note that for an S.L.N.E., the maximum amount of shareholders is five (natural persons). Establishing an S.L.N.E. by a single person is permitted without requiring any additions to the company name (in contrast to an S.L. and S.A., which require the specific addition Sociedad Unipersonal, meaning single member company). However, the founder of an S.L.N.E. is not allowed to be the single founder of another existing S.L.N.E.

There is no minimum amount of required capital for individual entrepreneurs. Forming an S.A. requires at least 60.000 € (not to be entirely disbursed). Establishing an S.L. requires at least 3000 € (to be entirely disbursed). Lastly, an S.L.N.E. requires a minimum capital of 3.012 € (to be paid by cash deposit). It is important to note that the maximum capital for an S.L.N.E. is limited to 120.202 €; otherwise, it converts to an S.L.

Whereas an individual entrepreneur is liable with his entire property, the liability for an S.A, S.L. and S.L.N.E. is limited to the paid capital. 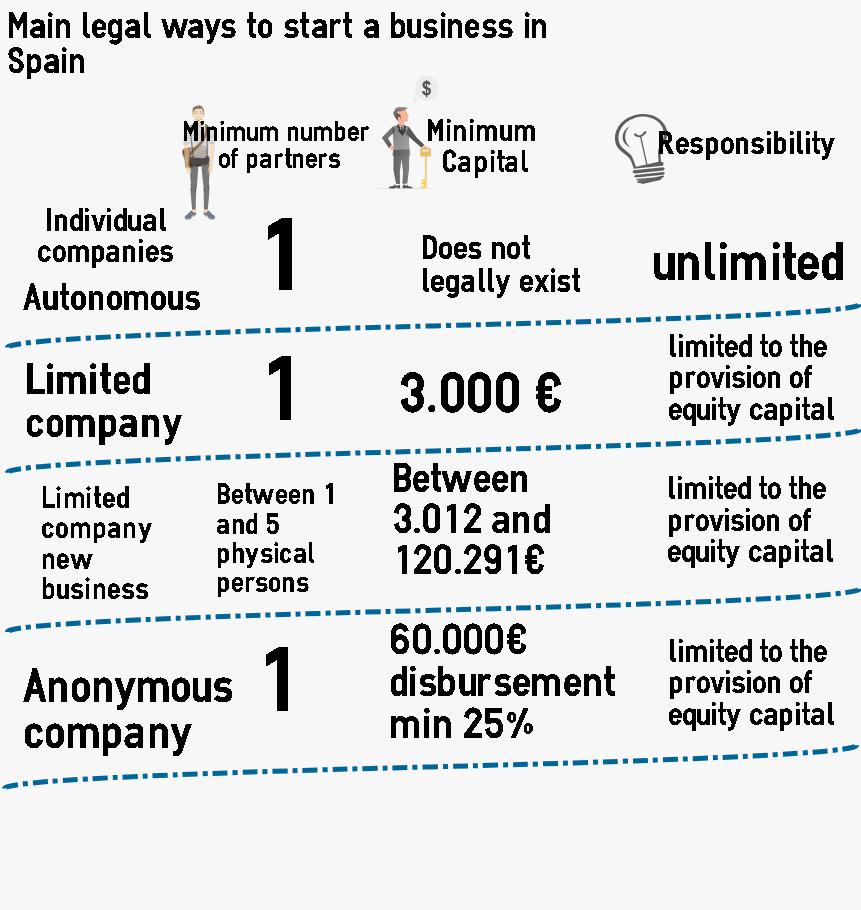 Procedure and costs of company formation in Spain

To establish a company, certain modifications exist for different company types.  The following procedural steps must be followed (some of them can be completed electronically, accelerating the formation process).

Reservation of the company name

The company’s name can be freely chosen with the limitation that another company, in order to prevent confusion, does not already use the name. Three to five name possibilities must be given to the Central Commercial Register to verify that a name is not already in use. In the case of an S.L.N.E. (Sociedad Limitada de Nueva Empresa), the name of the company must consist of the Name or Surname of one founder, a number code and the addition S.L.N.E.

The formation of a company must generally be notarized. No notarial requirements exist for individual entrepreneurships (with the exception of the operation of merchant ships).

Registration in the Commercial Register

As long as a registration in the competent Commercial Register is required, the company can only acquire legal capacity with its registration.

How to enforce an EU judgement within the European Union